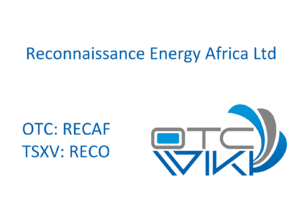 Reconnaissance Energy Africa Ltd. (OTC: RECAF, TSXV: RECO) is a Canadian oil exploration company currently conducting exploration activities in the Kavanago basin, which is located in northeastern Namibia and northwestern Botswana.[1] The company controls exploration rights for over 8 million acres in a sedimentary basin that they recently discovered.

In 2013 founder Craig Steinke acquired a source rock study dataset from IHS Market. Mr. Steinke hired four geologists and source rock expert Dan Jarvie to review the data and find potential oil and gas deposits. The data pointed to northeast Namibia. One well had been drilled (ST-1 by Etosha Petroleum) in that part of the country and, while there were not commercial quantities of oil, sourced rock was evident from the well results. Steinke's team believed that the basin could be deeper to the east of that well.[2]

After leasing the land from the Namibia government, it was revealed that an aeromagnetic study of the area had been conducted which had never been interpreted. Mr. Steinke acquired the survey from the government and hired geophysicist Bill Cathey for interpretation. Mr. Cathey's analysis indicated a previously undiscovered sedimentary basin up to 30,000 feet deep. He noted that every basin of similar depth produces commercial hydrocarbons.

By discovering a new basin, Mr. Steinke's company was able to secure the rights to such a large area.

In early 2020 ReconAfrica purchased a drilling rig and began a project to retrofit the rig for use in Namibia. The rig is capable of drilling conventional wells up to 13,000 feet deep.[3] The decision to purchase a rig over hiring another company to manage drilling operations was based on the potential cost savings, as well as the ability to spend more time on each well in order to gather as much data as possible.

In January 2021 the company began a three well drilling program with the goal of proving a working petroleum system in this previously unexplored basin. The wells were planned to be 'stratigraphic' which means the intention was not to find commercial quantities of oil, rather, the goal was to learn about the geography and gather information to guide them in developing the basin.

The first well (called the 8-2 well) of a four well drilling program for 2022 was spud on June 25, 2022. This well has a planned depth of 2,800 meters (9,184 ft.) and was expected to take about 60 days to reach this targeted depth.[4] The well was ultimately drilled to a total a depth of 2,056 meters and reached all geological targets. In addition, the company reports that the cost of the well was on budget. The drilling rig is expected to be moved to the next site (which has not been identified yet) by the end of September.[5]

During a talk at the Namibia Mining Expo, Reconnaissance Energy Namibia General Manager Robert Mwanachilenga stated, "We've made discoveries of oil and gas in the Kavango basin. We've got oil which flow there."[6] This statement caused quite a stir on internet forums, although the company has not verified this statement with an official news release.

Early investor presentations mentioned fracing, although the company has stated in later communications that they have no intention of fracing, they do not have an appropriate drilling rig, and they do not have the required permits. Current investor materials and operations updates clearly state that this is a 'conventional' play, meaning they believe they will be able to extract commercial quantities of oil through traditional oil wells.

In early 2022 ReconAfrica completed 450km of 2D seismic acquisition, processing and interpretation. Preliminary results were made public in November 2021 and the company stated, "the initial processing results of the seismic acquisition has produced high quality data revealing a variety of structural and stratigraphic features providing for a target rich environment for the upcoming drilling program". The results also indicated a clear distinction between the Kavango basin and the Owambo basin to the west. Company advisor Dr. Jim Granath stated, "This initial seismic data proves the Company’s basic premise, that the Kavango Basin is clearly a rift basin (geologically different from the Owambo Basin)".[7]

An additional 761 km 2D seismic acquisition commenced in February 2022 and was completed in June 2022. The company has reported that the data is obtained is of high quality.[8] A third round of seismic is currently being planned for later in 2022.[9]

Based on the two wells complete in 2021 as well as a 2D seismic survey later that year, reserves evaluator Netherland, Sewell & Associates was hired to prepare an oil and natural gas resource report. The report is as of December 31, 2021 estimates 5.3 billion barrels of oil in place, and indicates prospective unrisked light and medium crude oil of 999.0 million barrels as well as 1,422.9 billion cubic feet of conventional natural gas. Risked prospective resources are estimated to be 73.5 million barrels of light and medium crude oil, and 32.4 billion cubic feet of conventional natural gas. In regard to the potentially recoverable reserves, the company stated, "A prospective resource is an estimate of what may be recovered if a discovery is made and developed, but not all exploration projects will result in discoveries, and not all discoveries will be developed."[10] It is expected that additional seismic surveys and information from future wells will increase these estimates.

ReconAfrica has made it known that ultimately the company will seek a joint venture or farm out arrangement with a large oil company. This has been mentioned in company presentations, although the timeframe has shifted. Most recently, the target date for opening the data room has been Q3, 2022 and it seems like the company is on track to do so with the engagement of the firms Alvarez & Marsal and Hannam & Partners to assist with the joint venture process. Alvarez & Marsal an energy consulting firm expected to manage the data room. Hannam & Partners is an investment bank specializing in energy and natural resources. According to ReconAfrica, "Hannam & Partners will play the leading role in consolidating current interest from potential partners as well as leveraging their international energy relationships to secure additional interest from potential strategic joint venture partners."[11]

ReconAfrica has assembled a team of highly experienced experts in management, operations and technical knowledge.

ReconAfrica has developed and follows an approach to ESG that is based on international best practices, and they have dedicated C$10 million to ESG initiatives in Namibia.[14] As part of this program, 22 community water wells have been completed. Goals of the company's program include:

The Environmental Clearance Certificate was extended through August 25, 2025 by the Ministry of Environment, Forestry and Tourism. According to the company, "The ECC authorizes ReconAfrica, to continue drilling stratigraphic test wells, to depths, approved by Ministry of Mines and Energy and NAMCOR as well as completing a sidetrack of the Company’s first well, Kawe 6-2, in the Kavango Basin."[15]

Investment firm Haywood Securities has issued reports and updates beginning in late 2020. Using the Sproule report estimates for light oil, Haywood arrives at an unrisked price (value to ReconAfrica) per barrel of C$6.39 and a risked per share price of C$12.50 (based on 27% chance of commercialization and approximately 182 million shares outstanding).[17]

As is common with oil exploration, opposition from environmentalists has been ongoing since early in the planning and permitting process. One former geologist has been a vocal critic of drilling in the Kavango basin. Matt Totten Jr. (not to be confused with his father, Matt Totten Sr.) has written about and posted videos citing his concerns. Mr. Totten's background shows that he was a geologist, although his experience seems to be limited to a junior position for just a few years. He readily admits to having no specific knowledge of the Kavango basin or the data that ReconAfrica has gathered.

In multiple so-called 'research reports' issued by short seller Fraser Perring and his firm Viceroy Research, which were published starting in June 2021, many claims were made about ReconAfrica's business practices, ethics, stock promotion and exploration activities. One such claim was that ReconAfrica "has a near-zero chance of finding any asset of value in their exploration site, and an even lower chance to capitalize on any find".[18]

It is worth noting that Fraser Perring's integrity has come into question. On September 8, 2021 the Financial Sector Conduct Authority (FSCA) fined Viceroy Research and its partners, Mr Aiden Lau, Mr Fraser John Perring and Mr Gabriel Bernarde fifty million Rand (approximately $3.5 million) for publishing "false, misleading or deceptive statements, promises or forecasts regarding material facts about Capitec, which they ought reasonably to have known were not true. Further, notwithstanding being made aware that what they had published was false, they failed to publish full and frank corrections". The FSCA also states that Viceroy had a profit sharing agreement with client with a short position.[19] While this action was not related to ReconAfrica, it may provide some insight into the business practices of Viceroy Research and the overall validity of their reports. One report on Fraser Perring's business practices and reputation states, "as revealed by a seven-month investigation by the Southern Investigative Reporting Foundation, Perring is a charlatan of the first order, with a brazen multiyear record of personal and professional deceit".[20]

In a press release dated February 4, 2022 it was announced that the company "and certain of its current and former officers, directors and third-party contractors have been named as defendants in two almost identical purported class action lawsuits filed by Company shareholders in the United States District Court in Brooklyn, New York. The lawsuits were filed in the wake of a third, almost identical lawsuit identified by the Company in an October 28, 2021, press release and subsequently voluntarily dismissed by that plaintiff on November 9, 2021. The pending lawsuits have been consolidated by the court, which appointed a lead plaintiff and lead counsel to represent the purported class members."[21] The company stated in a press release, "ReconAfrica will undertake vigorous action to defend itself against any such claims."[22] There are rumors that Anson Funds (see Stock Manipulation Allegations) coordinated with one or more law firms to initiate potential class action lawsuits as part of a 'short and distort' campaign.[23]

A complaint filed with the High Court of Namibia in July 2022 sought to force the suspension of drilling activities based on challenges to the company's Environmental Compliance Certificate. The complaint was swiftly dismissed by the court and the complainants were ordered to pay ReconAfrica's legal fees. [24]

Rumors of massive short selling have abounded, although, as with most OTC traded stocks, it is difficult to ascertain how true these rumors are. One website claims to have evidence of a coordinated short attack lead by the asset management firm Anson Funds and its Chief Investment Officer Moez Kassam. Further, it is claimed that the lawsuits, Viceroy Research reports, and articles in the Globe and Mail are all part of Kassam's campaign.[25] There is no indication of who runs the website and what their interest in, or connection to, Recon Africa is. Lending credence to the accusations against Anson Funds is the fact that the firm has been subpoenaed in a U.S. Justice Department inquiry into short sellers tactics.[26]

Related pages
Retrieved from "https://otcwiki.net/w/index.php?title=RECAF_-_Reconnaissance_Energy_Africa_Ltd/Wiki&oldid=107061"
Category:
This page was last edited on September 8, 2022, at 12:32.
Privacy policy
About OTC Wiki
Disclaimers