From OTC Wiki
Jump to:navigation, search
Asia Broadband, Inc., through its subsidiary, Asia Metals Inc., focuses on the production, supply, and sale of precious and base metals primarily in Asian markets. It also operates AABB Gold token, a minted mine-to-token gold-backed cryptocurrency; and AABB Wallet. The company was incorporated in 1996 and is based in Las Vegas, Nevada.
Click the menu options below to view or add content 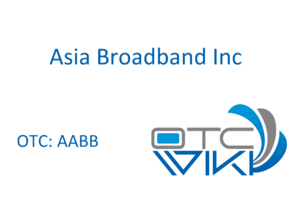 Asia Broadband (OTC: AABB) is a resource company that aims to supply base metals to Asian markets from mining operations in Mexico.[1]

AABB jumped on the crypto bandwagon by launching a golf backed token in March 2021 and is in the process of building a cryptocurrency exchange. [2] No data is collected and transactions are 100% invisible to third parties. At this initial stage, the AABB Wallet has opened trade for purchases who want to transfer AABB Gold tokens to other users who also have the AABB Wallet. This preliminary version is meant to increase token circulation and generate revenues that can support and stabilize the token price once AABBG is openly tradable on the market.[3]

On July 21, 2021 the company issued an operations update via a press release. In the update they stated that two properties under evaluation in Columbia and Mexico were deemed not feasible for the rapid development projects they are seeking. In addition, they announced continued due diligence on other properties in Mexico. A project in Colima, Mexico is awaiting special permitting to move ahead with expanding infrastructure , conducting geophysics capture, and initiating a drilling exploration program. They also announced the opening of a central operations office in Mexico City.[4]

The company is in the process of acquiring mining concessions in Mexico as part of their strategy to focus on areas "where AABB has a comparative advantage of development resources and expertise readily available for rapid expansion and duplication of the Company’s previous gold production success." They have discontinued development of the Los Reyes and Colima properties.[5]

The Acaponeta gold project is a key part of AABB's expansion into physical gold holdings and gold production. This project is located approximately 3 kms from the town of El Carrizo. It includes infrastructure, two mine sites, and a processing facility capable of producing 200 tons per day. AABB has signed a letter of intent to acquire this concession.[6]

Located near San Martin de las Canas, approximately 70 kilometers from Guadalajara. Like Acaponeta, this project is part of the plan to increase physical gold holdings. Note that the previous exploration company was not able to agree to terms with the property owner. AABB has signed a letter of intent for an 80% interest.[7]

This concessions is located approximately 15 kms from Tonila and 30 kms from Colima. AABB has an agreement to acquire a 100% interest and an option to acquire two more concessions for $700,000.[8]

The company has signed a purchase agreement for 100% of the La Paz mine in Etzatlan, Jalisco, Mexico.[9]

When was the company founded?
The company was founded in 1874.