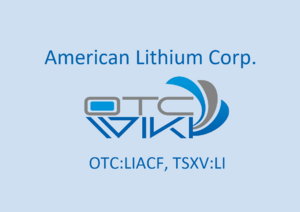 American Lithium Corp. (OTC: LIACF, TSXV: LI) is a Lithium exploration and development stage company based in Canada. The company engages in the acquisition, exploration, and development of lithium projects throughout America. Its three significant projects include the Falchani Lithium Project; Macusani Uranium Project, located in the Province of Carabaya, Department of Puno in southeastern Peru; and Tonopah Claystone Claims (TLC), situated near the regional hub and county seat in the town of Tonopah in Nevada.[1] The company’s stock is publicly traded on OTCPK under the ‘AMRLF’ symbol. It was initially known as Menika Mining Ltd. and changed its name to American Lithium Corp. in April 2016. American Lithium Corp. was founded on February 25, 1974. It has its headquarters in Vancouver, Canada.[2]

The company actively engages in the development of large-scale lithium production projects and eyes the world’s top-producer position. It is primarily focused on enabling a smooth transition into the new energy paradigm via continued exploration and development of its strategically stationed projects. Its TLC project is a near-surface lithium deposit attributed to sustainable low-cost mining formulas. The project is conveniently positioned near paved roads, power, and water sources aiding in logistics. Research indicated that TLC holds 3.35Mt lithium carbonate equivalent (LCE) measured resources, 2.02Mt LCE indicated resources, and 1.76Mt LCE inferred resources. The company initiated a massive drill exploration exercise with the aim of upgrading and expanding the project and ensuring its feasibility by the end of 2022.[3]

The company is developing one of the world’s largest and lowest-cost uranium deposits at the Macusani Project. Operations in this venue target to positively contribute to the global need for clean and efficient energy. The project has proposed production averaging more than 6 Mlbs U3O8 per year with a 10-year mine life. Its PEA mine plan resources are approximately 70 Mlbs U3O8 at 289 pp. The firm has expansion drill plans aiming to capture 47 plus targets around the Macusani project.[4]

The International Energy Agency’s (IEA) August 2022 report indicated that the “supply of some minerals such as lithium would need to rise by up to one-third by 2030 to satisfy the pledges and announcements for EV batteries in the Announced Pledges Scenario (APS).” Lithium has the largest demand-supply gap, needing approximately 50 new average-sized mines. This means immense opportunity for companies that operate in the industry.[7]

The company reported its operating and financial results for the three months ending May 31, 2022, on Aug. 02, 2022. Highlights of the quarter performance comprise:

The company is conscious of and dedicated to upholding high standards of corporate governance, social accountability, and environmental stewardship. The firm’s board constantly reviews its activities to ensure total compliance, transparency, and healthy business practices. The company is thus committed to ensuring that both its commitments and its stakeholders’ are meticulously aligned to develop sustainable, long-term businesses that benefit associated communities. Highlights include: