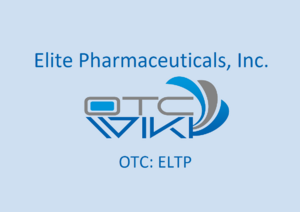 Elite Pharmaceuticals, Inc. (OTC: ELTP) is a specialty pharmaceutical firm that develops a range of generic products. It strictly operates in the Drug Stores & Pharmacies, Retail, and Manufacturing industry. The company engages in the research, development, and manufacture of oral, controlled-release drug products, and generic pharmaceuticals. It employs proprietary know-how and technology for the manufacture of generic pharmaceuticals. Elite Pharmaceuticals conducts its operations in two segments; Abbreviated New Drug Applications (ANDA) for Generic Products and New Drug Applications (NDA) for Branded Products. It owns and licenses numerous generic and oral products to contract manufacturers such as Epic Pharma, LLC, Lannett Company, Presco, LLC, and TAGI Pharma. Its products include Phentermine HCl 37.5 milligram tablets (mg), Dextroamphetamine Saccharate, and Amphetamine Aspartate, among others.[1] Elite Pharmaceutical Inc. was incorporated on October 1, 1997, and is headquartered in Northvale, New Jersey. The company’s stock is publicly traded on OTCMKTS under the ‘ELTP’ sign.[2]

The company focuses on developing pain management products. It has massively invested in technology used for research and development of the controlled-release array of drug products with high barriers to entry. The firm carries out contract research and development work regarding controlled-release drug technology for other pharmaceutical companies and works to develop and market (either on its own or by licensure to other companies) proprietary controlled-release pharmaceutical products. Elite operates a 55,000-square-foot United States Drug Enforcement Agency (“DEA”) registered facility in Northvale for the research, development, manufacture, and packaging of its pharmaceutical products. Its proprietary abuse-deterrent technology, ART, is a multi-particulate capsule that contains an agonist in addition to naltrexone, an antagonist, used primarily in the management of alcohol dependence and drug dependence.[3]

The firm offers a large portfolio of products tailored for a specific use such as Phentermine HCl 37.5mg tablets for the treatment of bariatrics under the Adipex-P brand; Naltrexone HCl 50mg tablets for the treatment of pains under the Revia brand; Phendimetrazine Tartrate 35mg tablets for bariatrics under the Bontril brand; Isradipine 2.5mg and 5mg capsules for cardiovascular diseases; Trimipramine Maleate Immediate Release antidepressant capsules under the Surmontil brand; Acetaminophen and Codeine Phosphate for the management of mild to moderate pain; and antibiotic products, among numerous others. It also manufactures controlled-release products on contract for third parties targeting allergy, bariatric, infection, and pain scopes.[4]

Prologica International, Inc., Elite’s predecessor, was incorporated in 1984 in the state of Pennsylvania and completed its Initial Public Offering in 1988. Elite Pharmaceuticals sealed a merger with Prologica on October 24, 1997. The company acquired ELI in 1997, a company that developed controlled-release versions of various drugs, including drugs that provide therapeutic benefits for angina and hypertension, a nonsteroidal analgesic drug, and one which appears to lower blood glucose by stimulating insulin from the pancreas.[5]

The company conducted a Q1 2023 Earnings Conference Call on August 16, 2022, for the period ending June 30, 2022. Highlights of the firm’s financial performance include:

Elite Pharmaceuticals recently secured FDA (U.S Food and Drug Administration) approval to exclusively manufacture and package the generic version of Sabril (vigabatrin) 500 mg powder. Vigabatrin is an antiepileptic drug marked for refractory complex partial seizures and used as adjunctive therapy in patients with mere response to several alternative treatments. Lannette is licensed to market and distribute the product across the U.S and its territories.[7]

Elite Pharmaceuticals on March 17, 2011, announced the settlement of a lawsuit filed against the company by ThePharmaNetwork, LLC (TPN) in the Superior Court of New Jersey, Chancery Division: Bergen County. ThePharmaNetwork initiated a lawsuit against Elite alleging that the respondent breached certain obligations concerning a Product Collaboration Agreement, made as of November 10, 2006, under which Elite and TPN agreed to collaborate in the development, commercialization, manufacturing, and distribution of a generic pharmaceutical product, methadone hydrochloride in a 10 mg. tablet (the "Product"). Elite punched back with claims of damages amounting to at least $1,125,000 in damages, resulting from TPN’s actions. The companies resolved to a settlement agreement on March 11, 2011, where both agreed to drop the charges with prejudice and further terminate the product collaboration deal.[9]